View of the island of San Giacomo in Paludo

Visiting the Lagoon of Venice, on the way to Burano, there is a little island surrounded by a brick wall: S Giacomo in Paludo. One of those places that makes you wonder what stands behind the screen.

Today no longer, but in the past, it housed a monastery for pilgrims.

Thanks to its position and to its connection with the East, Venice became a very important port for those searching for a passage to the Holy Land.

Venice then, like today, had to cope with thousands of visitors and had a very well organized system to support pilgrims arriving in town.

People named Tholomarii, sort of tourist guides of the past, were there to help pilgrims to orientate and to find a place to stay, food and a ship passage. In 1255 the Venetian Government even had to regulate the profession because of a lot of unauthorized people who were trying to cheat the poor pilgrims – nothing different from today.

To host all these people the town planned a lot of monasteries on various Venetian islands: S. Clemente, S. Maria delle Grazie, Lazzaretto Vecchio and S. Giacomo in Paludo.

Because of this important history, Prof. Gelichi Sauro of Venice University’s (Ca’ Foscari) Depart. of Medieval Archaeology was given the possibility to organize an archaeological campaign on the island of San Giacomo in Paludo. During the excavations a very interesting object from the days of the pilgrims was found: a pilgrim’s ampullae. 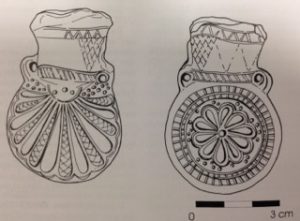 (from BAUDO F., MAZZOCCHIN G. A., CAIRNS W. 2007)
Pilgrim’s ampullae from the island of San Giacomo in Paludo, first quarter of the 14th Century

Pilgrims’ ampullae were carried by pilgrims tied to their belts or sewn on their dresses and contained the oils of the lamps that were burning next to the tombs of the saints in various sanctuaries around Europe and the Holy Land.

Medieval pilgrims’ ampullae were very small, not more than an inch and a half and were made of lead or tinlead.

Medieval pilgrim’s dress with ampullae tied to his belt

This was a rather interesting discovery for Italy as the findings are rare in this country and most of the time done in casual contexts that makes the dating of the pieces difficult.

The one found on San Giacomo in Paludo could be dated to the first quarter of the 14th Century.

Researchers even managed to understand with which type of lead it was made of and this was another great discovery as it came out that the provenance was German. So, maybe, the ampullae belonged to a pilgrim coming from Northern Europe to embark towards the Holy Land or, maybe, a piece made in Venice with German imported lead.

Thanks to a research that I was doing a few years ago at the university of Venice on the subject, I had the honour of holding this treasure in my hands and it was amazing to realize that history was right there talking to me through this tiny but “heavy” piece. I will always remember that feeling.