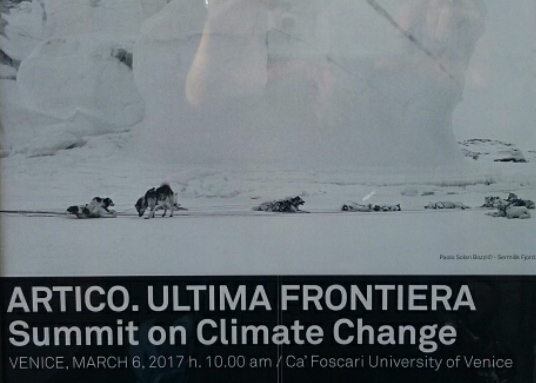 Summit in Venice at the Ca’ Dolfin Palace

18th Century frescoes by Nicolò Bambini in the main room in the Ca’ Doflin Palace in Venice: “The Glorification of the Dolfin Family”

The summit was about the changes in Artic, Antarctic, the differences in the last few years of glaciers extension and thickness, and the increase of global warming and of the sea level. The conference was introduced by Flavio Gregori, Provost for Cultural Activities and Relations, Ca’ Foscari University of Venice, and by the Artistic Director of the Casa dei Tre Oci, Denis Curti, where on the Giudecca island, in Venice, there is an exhibition going on up to April 2nd.
The title of such an exhibition is “Artico Ultima Frontiera” with photos and videos made by Paolo Solari Bozzi, Ragnar Axelsson and Carsten Egevan.

One the relators, Andrea Tilche of the European Commission, DG Research & Innovation, Head of Unit Climate Action and Earth Observation, Brussels, talked about the important connection between science and art to pass strong messages so that people become aware of universal subjects.

But which is the reason of such an exhibition and summit in Venice?
Venice was founded in the middle of the Venetian lagoon. It is totally depending on it, but it can also be damaged by it, because of floods, because of its pollution.

Since the early times Venetians knew the importance of the lagoon for the safeguard of Venice. Still nowadays, in the Correr Museum in Saint Mark’s Square, among the many works of art, you can see an inscription engraved on marble, called the Edit of Egnazio dating back to the 16th Century, written by a Venetian humanist whose original name was Battista Cipelli. It is a warning to respect the Venetian lagoon in all its integrity, because Venice lives and will live only if the Venetian lagoon will live! 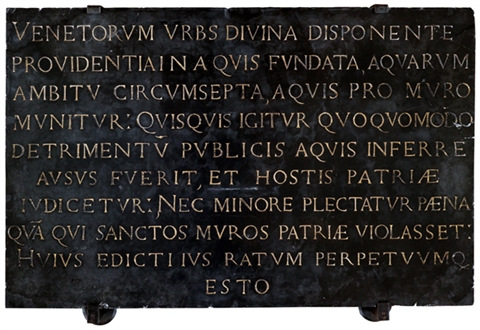 Jane da Mosto, director and co-founder of the association “We are here Venice” www.weareherevenice.org related the problems of such a city, whose beauty is strictly connected to the water but also it has to be defended from exploitation and misuse.
“If we don’t save Venice how can we save the world?” Vivienne Westwood

Vivienne Westwood in Venice on a typical Venetian boat, along the Grand Canal

A Best Venice Guide can tell you many things about the past times but also something about what’s going on in Venice in order  to defend it, because Venice is heritage of all the world and needs the respect of all of us!