The Barnabò Garden: Thanks, dear Anna! 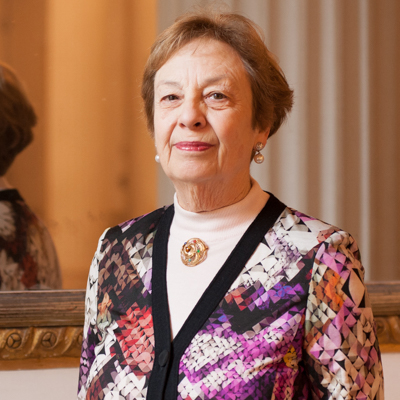 One of the most delightful moments I ever spent with Anna Barnabò took place in her lovely garden, when a group of Canadian musicians performed a magical concerto for her. The musicians included Michael Cartile, on trumpet, and Kerry-Anne Kutz, a soprano who serenaded us with her enthralling arias. Other dear friends in attendance included pianist Sandra Hunt, cellists Gary Russell and Vanessa Hunt Russell, and former bassoonist Richard Prytula, who organized this enchanting soirée.

The Barnabò Palace is home to one of Venice’s most splendid gardens. The grounds boast a priceless view over the Grand Canal, but the garden that Anna carefully crafted and meticulously tended is its greatest treasure.

Anna was always the garden’s heart and soul, and in some ways, still is. The luscious fragrances wafting on the breeze and the shimmering cornucopia of roses of every shape, color and size still remind us of her.

Most of the roses in the garden are modern. Indeed, Anna delighted in seeing her roses bloom several times, even if their blossoms gently wane over the course of the season.

One of these is the pale pink, pearl-flecked New Dawn. Cloaking the outside wall and gazebo (photos 1-2), the roses ramble over a trellis, whose solid struts shore up their pliant stems. The New Dawn was the first rose ever to be patented; the patent on this beauty dates back nearly a century, to 1930. Though they tend to be late bloomers, Anna loved their delicate nuances and porcelain pink blossoms – a treasure well worth waiting for. Photo 1: The gazebo is carpeted in New Dawn roses This Italian garden features typical box-hedged flowerbeds. It is characterized by markedly Venetian elements, including the mythological statuary at its entrance. In these sculpture groups, we see powerful images of strapping divine beings and mythological creatures, calling to mind images of earth and nature.

Just after the charming courtyard and characteristic well, you’ll discover two groups of mythological statuary. Hercules lifts Antaeus off the ground, breaking his invincibility, while Jove carries Ganymede away to the heavens.

Surrounded by a quartet of flowerbeds whose statues depict the four seasons, cast your eyes upon a fountain decorated with images of Hercules as a child strangling the snake, another potent reminder of these powerful symbols (photo 3) . Photo 3: Fountain depicting Hercules as a child, dwarfed by the serpent. In the foreground, the beautiful Wall Street roses

The four flowerbeds are abloom with roses of many types. Most are in shades of pastel, a color the Countess adored.

You might be wondering why the tour guides who were friends with Anna referred to her as the Countess. The answer is quite simple: we always paid tribute not only to her title but also to her elegant, unmistakable style by calling her the Countess of Barnabò (photo 4). Photo 4: Anna putting the finishing touches on the preparations for an unforgettable evening

In these flowerbeds, discover the Queen Elisabeth rose, which towers like a queen over its peers (photo 5). This rose was bred to commemorate the crowning of Queen Elisabeth II in 1953; its vibrant pink hues are among the Queen’s favorites, often making an appearance in her apparel. Photo 5: Queen Elisabeth roses tower above this statue of Spring

One of the most singular roses in the garden, the Wildfire, lies just a few inches from the Queen Elisabeth. Its inward-turning petals seem to be withering, but are actually in full bloom, as attested by these stunning flame-red flowers (photo 6). Photo 6: Close-up of a Wildfire rose

In order to strike a perfect balance, Anna’s roses are carefully distributed throughout the garden. The splendid Peace rose (photo 7) takes pride of place, and is counterbalanced by the delicately blushing Capucci (photo 8). Photo 8: Capucci roses set against the backdrop of the piano nobile of the Barnabò palazzo

There are few roses that could equal the queen – although the Empress Farah, a beautiful white rose with exquisite carmine edges (photo 9), gives her a good run for her money. Like most people, the Countess adored it, although some critics would beg to differ. And there are no words to describe the brilliant Chantal Mérieux – which reveals Anna’s strong ties to France (photos 10-11) – or the disturbingly peculiar “nocturnal” color of the Blue Moon, which can also be seen from the Grand Canal (photo 12). Photo 10: Chantal Mérieux roses stand alongside the walkway leading to the Grand Canal

Photo 12: Blue Moon roses in full bloom. In the background, you can see the wellhead and the niche dedicated to Neptune

The garden is a veritable kaleidoscope of colors, from the lemon-tinged canary yellow blossoms of the Alba Chiara to the ochre yellow of the Primo Sole; the dazzling whites of the scintillating Sea Foam – conveniently located next to the water (photos 13-14) – to the snow white John Paul II; the gleeful Letizia to the deliciously fragrant Isabelle de Reimpré and the diminutive Snow Carpet (photo 15).

Almost every inch of the typical Venetian well is abloom with Snow Carpet roses. The wellhead pays tribute to the Cappello and Malipiero families, who lived in the palace for centuries before the Barnabò family. Federico Barbarossa, who served as Holy Roman Emperor, allowed the Malipiero family to adorn their coat of arms with an image of an imperial eagle’s feather (photo 16) .

Photo 16: The Malipiero coat of arms in the entrance hall

Although the Countess always put roses front and center, the garden is also awash with many other flowers spanning the gamut of brilliant shades of white, including lilacs, camellias, water lilies, Japanese anemones and jasmine. If you’re looking for a broader palette of colors, take in the pink and yellow tinges of the irises (photos 17-18) and the many types of magnificent hydrangeas, including the stunning Annabelle (photo 19).

Photo 19: Hydrangeas line the walls, including the stunning white Annabelle

Indeed, this hydrangea is unparalleled, boasting enormous, umbrella-shaped flowers. Initially discovered in 1910 by two sisters in the town of Anna, Illinois, and commercialized nearly half a century later, its name, Annabelle, pays tribute to these two belles.

Anna, your garden is a spellbinding panoply of wonders. My heartfelt thanks for this extraordinary heritage!

PS: Thanks to the generous hospitality of the Barnabò family, arrangements can be made to visit this spectacular garden. Come and see it with one of the members of the Best Venice Guides team.