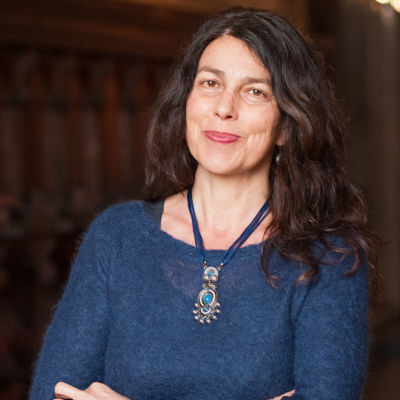 When the first community of Dominicans in Venice obtained permission to construct their church and monastery in 1234, the area was little more than a marsh. After they improved the site, a small church was built eventually to be reconstructed to a larger scale in the 14th C. Saints John and Paul (that the Venetians simply call Zanipolo, a contraction of the names of the two saints) was to become the largest church in the city, 102 meters long, commemorated with a mark on the floor of St. Peter’s in Rome alongside the largest churches in the world. 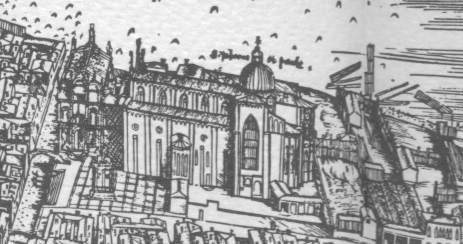 Saints John and Paul in the Jacopo de Barbari map, 1500

Since the time of the 1400’s the funerals of the doges (Venice chief governors, the dukes) were celebrated here.
Imagine the solemn ceremony that took place at dusk with a grand procession carrying candles, torches and lanterns as they left the Ducal Palace to escort a wax cast of the deceased doge. Once they reached the  entrance of the church, the wax likeness was tossed into the air three times…which is why a facsimile was used instead of the actual corpse! Doges could be buried in the church of their choice, however many of them decided to be buried in this temple.

The interior of this church is elaborately ornamented, featuring 36 sumptuous funerary monuments (25 of which dedicated to doges) and 150 headstones: a stately cemetery for illustrious people!

A special interest was the discovery of the sarcophagus of doge Marin Faliero which was found in the early 1800’s when the Chapel della Pace was demolished. Inside the sarcophagus was the skeleton of the leader who had been decapitated in 1355 for treason. His skull was at rest on his chest!

A view of the church interior

And there’s more. Inside this church you will admire outstanding works of art, such as the altarpiece by a young Giovanni Bellini, a canvas by Lorenzo Lotto, a wonderful cycle of paintings by Paolo Veronese (recently moved here to decorate the Chapel of the Rosary) and the extraordinary ceiling of Giambattista Piazzetta. You will also discover rare relics such as the mummified foot of Saint Catherine from Siena and the casket containing the skin fragments of Marcantonio Bragadin (the defender of Cyprus flayed alive by the Turks).

Finally, before or after you enter the church, stop and look at the stunning monument to the memory of the mercenary Captain Bartolomeo Colleoni by Verrocchio. A true masterpiece as well as the only funerary monument you will find outside a church in all of Venice!
To learn about this interesting fact and more… contact the experts from BestVeniceGuides… these are stories and anecdotes we enjoy to disclose. We look forward to having you here!