The Doge of Venice Antonio Grimani in the art and history 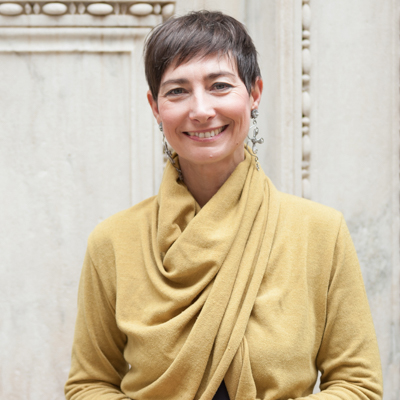 Antonio Grimani’s life was a life of ups and downs.

When reading his biography written by Andrea da Mosto, you are left with the feeling his life was an intense, exciting life; he experienced great fame as well as a terrible fall, followed by new, important fortune. Private, but above all, public.

For sure, he was not an easy man. You can tell so when observing his bronze portrait attributed to Andrea Briosco: 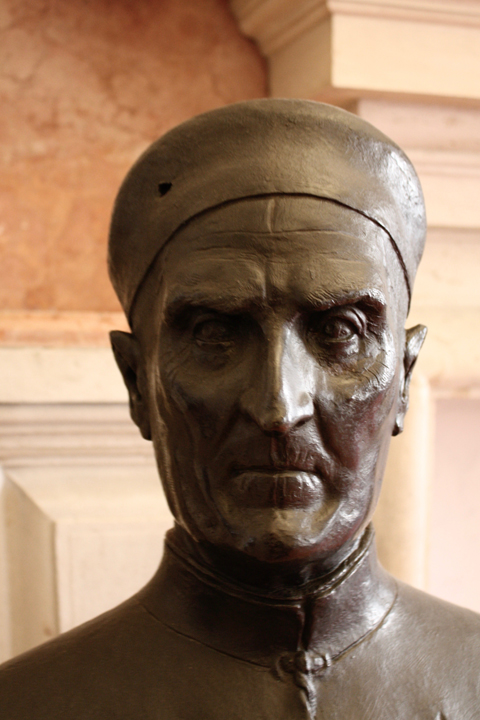 Bust in bronze of Antonio Grimani as Procurator, attributed to Riccio; located in Grimani Palace, Venice

The life of Antonio Grimani

Born in 1434 on 28th December, Antonio was surrounded by a family hit by financial and social problems as his mother was not a patrician. Thanks to his intelligence and lucky circumstances, as da Mosto explains, Antonio soon became very rich. Not just terribly wealthy, but also acknowledged as an excellent trading expert. Another patrician of his age commented: “what was dirt and mud, in his hand turned into gold”. And he was a smart politician, too.

How did he use this wealth? Antonio used it to create important alliances and above all to obtain the cardinalship for his son Domenico.

To be a wealthy patrician though implied to have some duties, too. And when re-elected as Capitano da Mar of the Venetian navy in 1499 (a position similar to that of Admiral), he had to declare war against the Ottomans. Too bad, however, he experienced a major military defeat in Zonchio, in the Ionic Sea and was considered responsible for it.

He was therefore punished and he was then taken under arrest from Venice to Cres (today Croatia). The dramatic picture of him, in a dark dress, red shoes and shackles on his ankles surrounded by his sons in tears was so imagined by Giuseppe Gather in his Venetian History (1862): 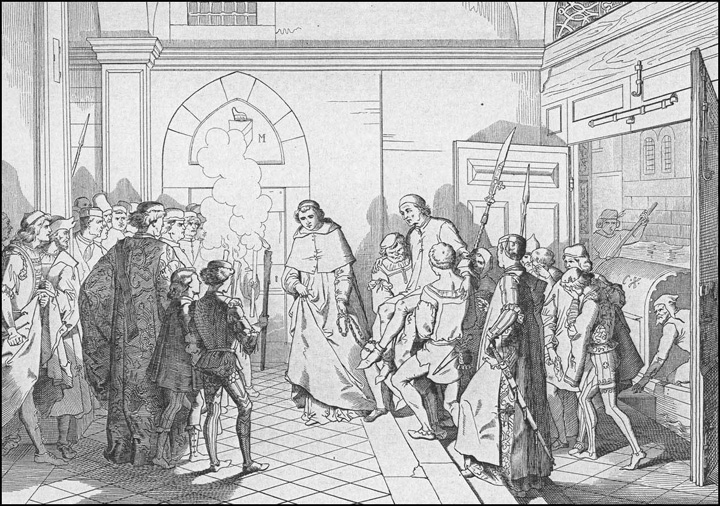 His son Domenico, however, managed to free his father and made sure he could reach him in Rome during the years of the League of Cambrai and the Venetian defeat in Agnadello in 1509. That offered then the opportunity to change the opinion the Republic of Venice had of him. Thanks to his diplomatic ability he convinced Pope Julius II Della Rovere not to declare war against Venice allowing the Republic to find the energy to react to the military defeats and turn as strong as before. So Antonio Grimani’s banishment was lifted, he returned to Venice, undertook some public positions and on the 6th of July in 1521 he was eventually elected as Doge.

The votive painting by Titian

Thirty years after Antonio Grimani’s death in 1523, the Doge Francesco Venier commissioned Titian the portrait of the doge on his knees, in front of the Allegory of Christian Faith. That was on the 22nd of March, 1555, and Titian was already working on it a few months later.
Those were indeed frantic years for Titian at the Doge’s palace and the painting was left incomplete when the artist died in 1576. Thanks to this delay, though, the painting was not destroyed in the fire of the Collegio Hall in 1574, where it was meant to be placed. 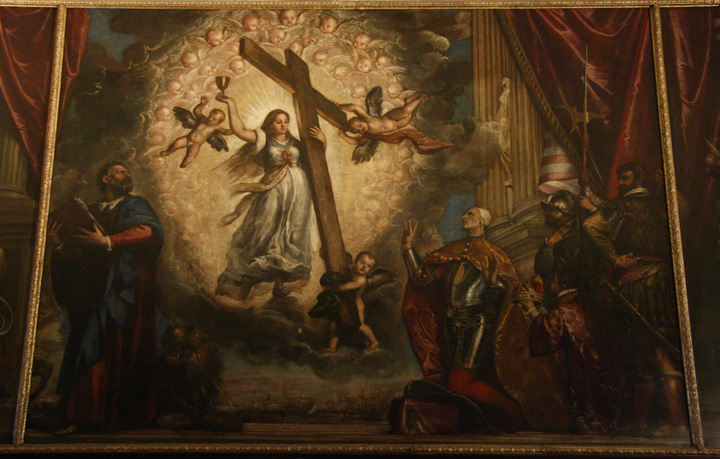 Today we can admire the painting in the Hall of the Four Doors, almost opposite the portrait of a descendant of Antonio Grimani, Marino, elected as Doge in 1595. It is likely that it was Marino to put pressure to complete the painting.
On one side St. Mark the Evangelist turns towards Faith, holding the Gospel in his hands and accompanied by a roaring lion, to intercede on behalf of the Doge Antonio Grimani. In the middle we see the Allegory of Christian Faith shimmering in a golden light, holding a goblet in her hand and supporting a very heavy cross, helped by flying cherubs. On the right we can see him, Antonio. The thin face, the long and wrinkled neck, the dark circled eyes and the open hands praying as if he were Jesus on the cross. And his dress: a wonderful golden and crimson red mantle, the shining armour and the “horn” (the hat of the Doge) in red velvet and gold, encrusted with precious gems and pearls, held by a young page. Behind him, two huge columns as a stage with a ruby red curtain and the coat of arms of the family frame the whole scene. Somebody underlined that the distance between the Patron Saint of Venice and the Doge Grimani is not accidental, but for sure we are all left in awe in front of the powerful armour and the wealth of the mantle. Not to mention how the colours of Venice, red and gold, prevail all over the composition.
And what about St Mark or the lion with his fierce eyes red with blood? Classical and powerful. 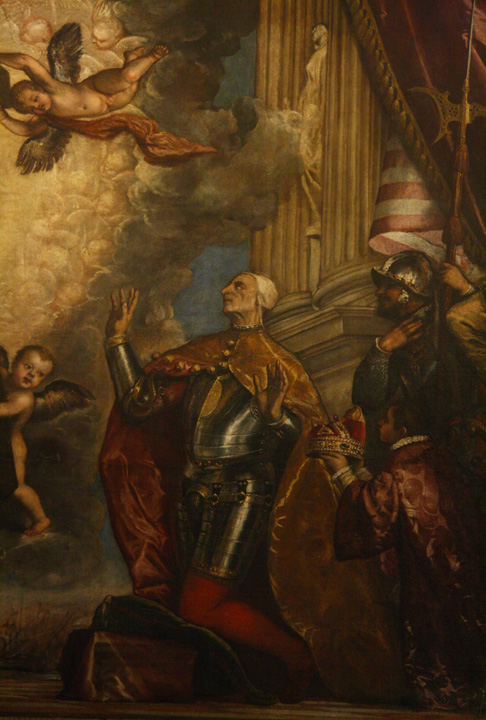 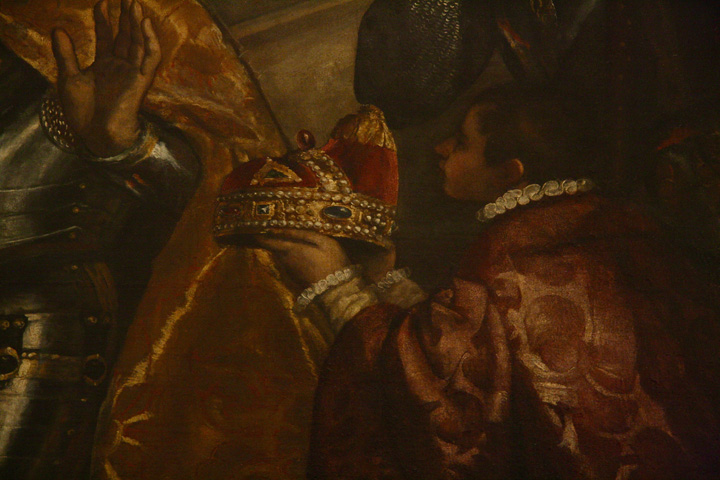 A special room in the Grimani Palace in Santa Maria Formosa

In his palace in Santa Maria Formosa in Venice, the nephew of Antonio, Giovanni Grimani, Patriarch of Aquileia, decided to dedicate an important room to his grandfather. He shared with him a controversial career and so when renovating the palace between 1558 and 1568, he could not but create a true mausoleum dedicated to his illustrious grandfather. Employing ancient and precious materials such as marble, he tried to erase the rumours about against him and thus bestow dignity and credibility on him. And while doing so, Giovanni managed to celebrate himself and his will against the hostile destiny he suffered from, too… but that’s another story which I will be happy to tell during our tour!

Grimani Palace in Venice, Hall of the Doge Grimani