The Querini Stampalia Garden by Carlo Scarpa: a symbol of Venice 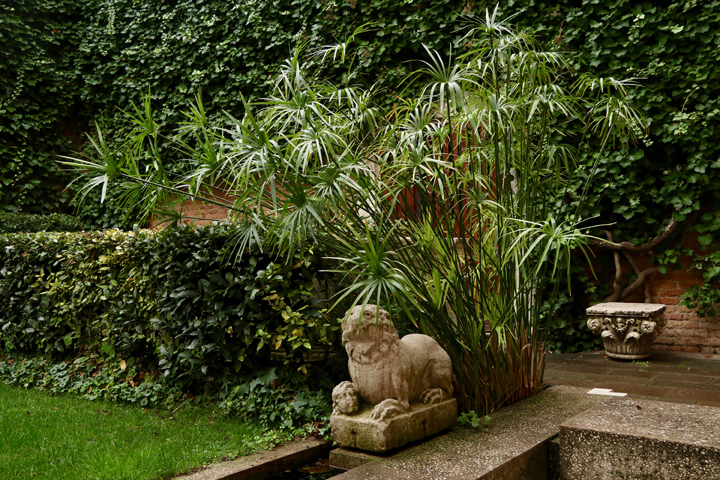 The Querini Stampalia Garden by Carlo Scarpa: a symbol of Venice

Would you ever say that a garden can symbolise the city of Venice at its best? Probably not, as the word “garden” is not exactly what one connects to Venice. And yet, this is what the architect Carlo Scarpa managed to do in the Querini Stampalia museum between 1959 and 1963.

Gardens in Venice have been described as hidden, secret, mysterious. Indeed, most of them are not visible as you explore Venice. Out of the over 500 gardens of the city, only 6 gardens are public and easy to spot. But the vast majority lies behind a high brick wall and all you can see is some ivy or wisteria peeping from above.

Carlo Scarpa’s garden is surrounded by a red brick wall, too. This wall is so tall that when you walk around it, it feels as if you were walking around a castle, impenetrable. But if you move to the waterfront of the Querini Stampalia palace, you will perceive the presence of the garden in the back. It’s a beautiful discovery. Your eyes need to get beyond some obstacles. The geometric pattern of the ironwork of the gates facing the water. Some transparent glass doors, half hidden by concrete blocks that like stairs visually connect the canal with the ground floor. But then, the reward for your eyes finally arrives: a small garden like an emerald jewel glitters behind.

This aspect is very Venetian. The urban structure of Venice conceals wonders just like gardens hide their presence from the eyes of distracted travellers. Most of the times in Venice you don’t see where you are going. So frustrating. So easy to get lost, but the labyrinth increases the curiosity and allows for a discovery of hidden beauty.

When you enter the Querini Stampalia museum, you can visit the garden and explore more of its Venetian essence.

Carlo Scarpa created the garden as if it were a large flower pot. The surrounding brick wall on two sides, a concrete wall, roughly one meter tall around two more sides. Its function is to protect the dirt from the high water, but it also echoes the artificial nature of Venice, a city built on reclaimed land at the expense of mudflats and marshy land. 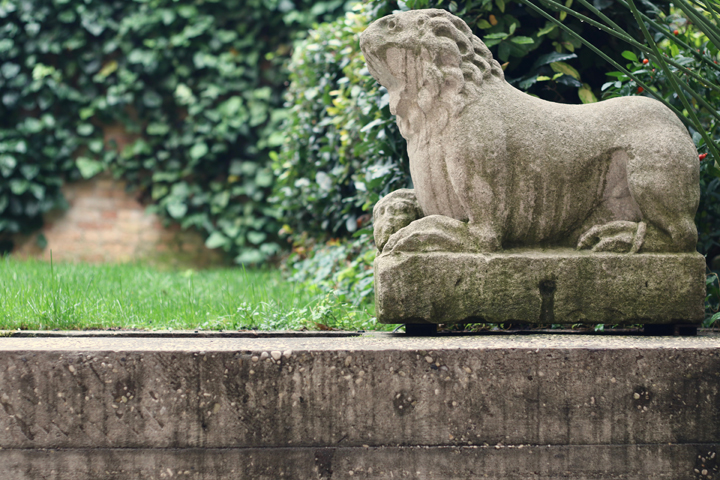 The Querini Stampalia garden and its brick wall surrounding the lawn

No need to mention that water plays a major role in this garden. As in Middle Eastern gardens, there are two fountains on the opposite sides of the green area. The water keeps on flowing from one side to the other with a gentle murmur to help us enjoy a moment of meditation and suspension and not too loud to disturb an intimate, gentle conversation. Water is also still, in Carlo Scarpa’s garden. You will find a pond where water is crystal clear, completely transparent and the bottom shines. Nearby you will find another pond, where water is instead dark and the nymphs flowers prevent you from perceiving the real depth. I can imagine the face of Ophelia sadly appearing in this water…

The two fountains are exquisite. Stop and look at them, both geometric labyrinths in metal and stones, or alabaster. In shapes that are rectangular or circular. I love the one in alabaster, as I find it so typically Venetian. Don’t misunderstand me, there is no alabaster in Venice, but alabaster is a material that forms thanks to humidity drops, shaping the stalagmites. Metamorphosis. Or just like Venice, a city of stones on water. While we know that water creates a form generating alabaster, here we see water acquiring a labyrinth form while running in the alabaster fountain. 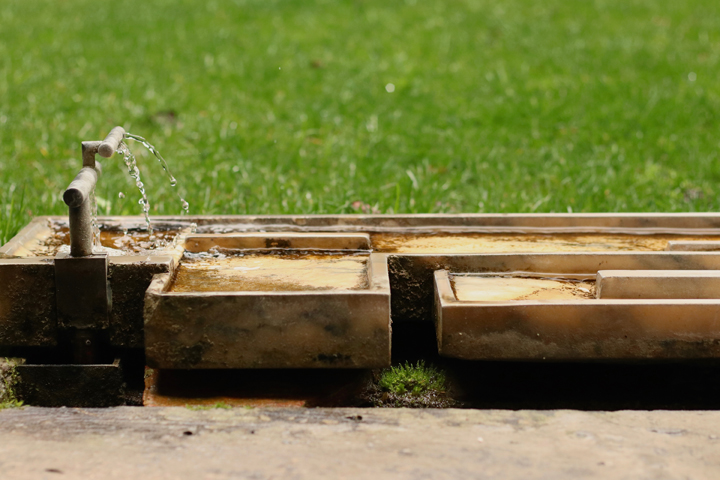 The garden is hosting plants, of course. A cherry tree, a magnolia, a pomegranate. Ivy, jasmine and just by the water, the most symbolic one, a papyrus. Carlo Scarpa explained this plant would evoke the library that the Count Giovanni Querini had generously donated to the city at his death in 1869. But again, this is so Venetian. Papyrus reminds us of Egypt, a country where Venetians were trading and where the body of the patron of Venice, St. Mark, came from. Above all, Venice was the city of Aldus Manutius, the capital of the printing industry. In the end, it is a city where culture was strictly connected to nature, a city in a lagoon.

Papyrus growing in the Querini Stampalia garden in Venice

So it does not surprise us to see reminiscences of art and artificial works here. The well-head of a cistern tells us how difficult it was to get drinking water in Venice. A gothic lion lies nearby, symbol of Venice. A Roman style capital decorates a side of the garden, which however has a strong Japanese atmosphere, too. A byzantine touch features in the mosaics tiles by Mario De Luigi, encrusted with gold leaf and silver foils in a concrete wall.

When in 1959 Carlo Scarpa eventually started his intervention, this part of the Querini Stampalia palace was little appealing. But Venetians know quite well that jewels can also originate from swamps when human beings are respectful towards nature.