Paradise by Tintoretto: a must-see in the Doge’s Palace

Paradise by Tintoretto: a must-see in the Doge’s Palace

When you visit the Doge’s Palace in Venice, you expect a place full of history and art. Unless you are accompanied by an experienced guide as one of the Best Venice Guides, it is really hard to select what to see and on what art pieces to focus your attention, especially in a reasonable amount of time. There are the institutional rooms, the notorious Bridge of Sighs, the Prison House, and paintings by some of the most recognized authors of the European Art History, like Titian, Tintoretto, Veronese or Tiepolo.

If there is a piece that you should look at with attention, that is undoubtably the so called Paradise by Tintoretto, still visible on the tribune wall in the Great Council room.

It is only when you perceive it from the real that you understand how impressive it is: one of the biggest oil paintings on canvas ever realized.

Paradise, by Jacopo Tintoretto, Domenico and workshop, on the Tribune wall in the Great Council room of the Doge’s Palace

The room of the Maggior Consiglio (Great Council) was architecturally conceived the way you see it today in the early 14th century, when a political change occurred in the elective system of the ancient State of Venice. Within a restricted number of years, the most prominent members in the city decided who were to be “nobles” and enjoy political rights, and who were never going to be. Thus doing, the major city organ acquired an impressively wide number of electors, which over the time spanned from 1,000 to even 2,000. To enable the supreme organ of the Republic of Venice to meet, an anonymous bunch of architects and engineers designed a huge room, still today considered one of the largest suspended halls in Europe.

Etching by Giambattista Brustolon from drawing by Antonio Canaletto, XVIII century. It shows a meeting of the Great Council. Tintoretto’s Paradise can be seen in the background

The wall destined to the Doge and the Six Councellors was adorned by a fresco painting with the Coronation of Virgin Mary in Heaven, by Guariento D’Arpo, executed around 1365.

Suddenly, on December 20th 1577 a fire started in the Ducal Palace. The Great Council decoration was all destroyed.

Relics of this painting were found in 1903 behind the huge canvas we are soon going to discuss. There were torn from the original wall and attached on panels to be displayed in a different room, the Sala dell’Armamento, where visitors can still admire them.

Guariento D’Arpo, Coronation of Virgin Mary in Heaven, ca.1365; originally on the wall of the tribune in the Great Council, today in the Sala dell’Armamento

After the terrible fire, soon restoration works were advanced. For the most prominent of the paintings in the room, a public selection was open, in order to choose the best artist for the purpose. From the documentation left, the competition opened around 1582 and the work was assigned to the very famous Paolo Veronese in cooperation with young Francesco Bassano. Abruptly Veronese died in 1588, they say more for the immense professional effort than for health problems.

Tintoretto was therefore indicated as the artist that had to paint the work, which had to correspond to what Guariento had painted two hundreds of years before.

The picture was very challenging to be painted, not only for the considerable amount of heads that it includes, but also for its uncommon shape, with a bride horizontal development and interruptions due to the presence of the doors and tribune furniture.

The theme of the painting is Heaven. The crowded composition chosen still suggests the old medieval tradition of the nine concentric spheres of which Paradise is composed. Every circle, inhabited by holy and blessed creatures, rotates around the essence of the world: the light of God. 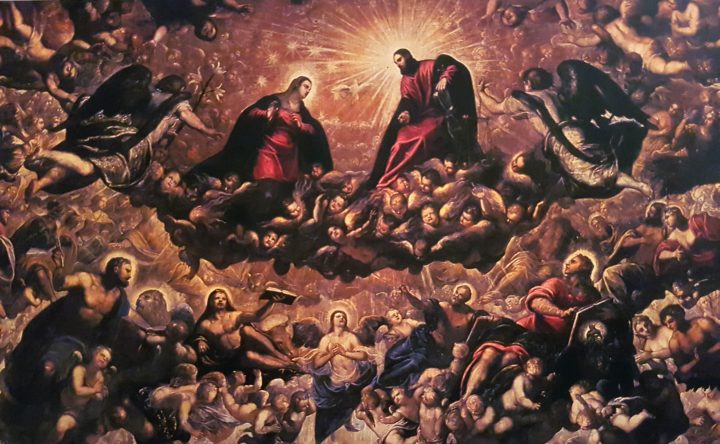 Paradise by Tintoretto, detail. The top central portion of the canvas marks the special presence of Jesus and Mary, archangels Gabriel and Michael, and the four Gospel writers

At the top of the painting, in the center, is the intellectual core of the picture: there is no Trinity as we might have expected, but the acceptance of Virgin Mary into Heaven by Jesus Christ. This theme was of great importance in Venice’s political propaganda for centuries, as Venice identified itself with Virgin Mary. Not a case that, on the left side of Mary, you can see archangel Gabriel with his lily flying toward her, commemorating the Annunciation: according to the myth, Venice was founded on March 25th 421 AD, exactly on the day when Gabriel announced Mary that she was to be the Mother of God. Reading beyond the lines, this image is a glorification of Venice more than anything else.

Around the central group, you will start noticing an ecclesial hierarchy, divided onto the different circles and floating around. First the twelve direct apostles of Christ, together with the four Evangelists. The use of spot light makes it easy to identify St. Mark, accompanied by a lion, the patron saint of Venice.

It would be almost impossible to enumerate about all 500 characters represented on this image. Some interesting are prophets like Moses, patriarchs, and saints like George or Christofer. Saint Justine occupies an important place, as she commemorates the important Christian defeat on the Turks at the Lepanto battle.

Tintoretto was about 70 years old when he was entrusted this picture. This is the reason why most of the art historians believe the execution of the painting was mainly executed by Jacopo’s son, Domenico Tintoretto, with the help of their considerable workshop.

If you want to learn more about the huge heritage of Ducal Palace, book a tour with a BestVeniceGuide and enjoy the best of Venice.

Believing Tintoretto was born in 1519, in 2019 we commemorate the 500th anniversary of his birth. Venice has prepared relevant celebrations in honor of Jacopo Robusti called Tintoretto: an exhibition about his early works in the Accademia Galleries, one about his mature work and masterpieces in the very same Palazzo Ducale in collaboration with the National Gallery of New York, and smaller exhibits in Palazzo Mocenigo and in the Scuola Grande di San Marco; besides, some scientific conferences and special itineraries to discover his art across the city.

Do not miss the chance of meeting up with one of the most incredible geniuses of the Italian Mannerism!