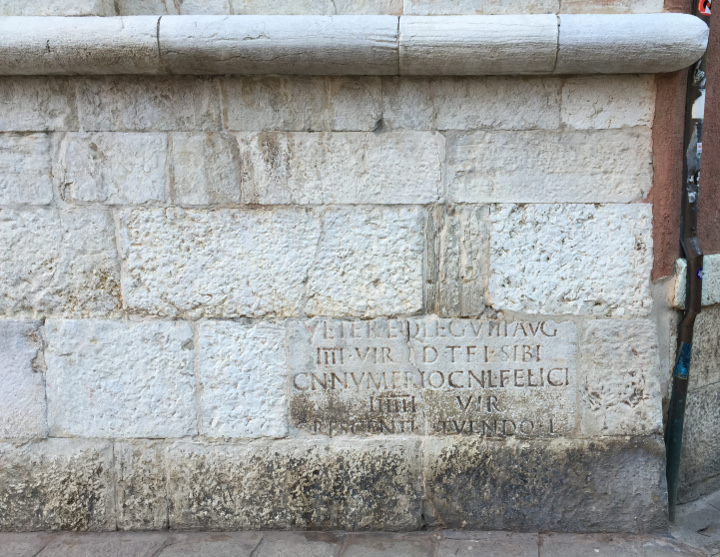 In Venice – this is well known – there are nor cars neither streets. The public transport is operated by boats that we call vaporetti, but the best means to visit the city are your feet.

Walking is definitely good for our health and also offers the opportunity to develop an lively interest in details.

The majority of tourists is inevitably distracted by the sequence of bridges and canals, by the quantity of tourist signs and nizioletti (toponymy signs) and by souvenir shops. Only the most attentive visitor will spot the hundreds of small bas-reliefs and inscriptions inserted in the masonry of buildings.

The most ancient inscriptions include a certain number of epigraphs in Latin language: they have always been an enigma for historians and archaeologists.

Back in the Renaissance Humanist scholars had already identified a large number of inscriptions in Latin; most of these had been removed in the past centuries and they are not anymore visible on site. In town the most significant collections of inscriptions are hosted in the Museo Diocesano di Arte Sacra, the Seminario Patriarcale di Venezia, inside the complex of St. Mark’s Basilica.

Nevertheless a few examples can still be traced back.

The unusual itinerary that we propose leads you through the sestieri (neighborhoods) of San Marco and Castello; the fragments of epigraphs are easily traceable.

Obviously only a guided tour with a BestVeniceGuide will give you the chance to learn the meaning of these inscriptions and will reveal where other ancient traces lie hidden in the city.

At the base of the bell tower of San Vidal Church we find a big ashlar: it is made of a local limestone variety called Aurisina and it bears an inscription. The stone element was originally part of a funerary monument in the Dalmatian geographic area, dated to the end of the I century B.C.

If we move on to the building left of the bell tower, we will discover that the left pier of one of the windows of the ground level is actually a stone bearing the fragment of an inscription.

In the entrance hall of Palazzo Loredan, seat of the Venice City Hall, we can see a block of granite and a Roman column. These relics were once part of the funerary memorial for Nazario Sauro – a 1st World War Italian national hero hanged in 1916 by the Austrians in Pula, nowadays Croatia – and  were brought to Venice after the 2nd World War. The base of the column bears an inscription that enabled scholars to classify it as part of a funerary monument dated to the II century B.C. 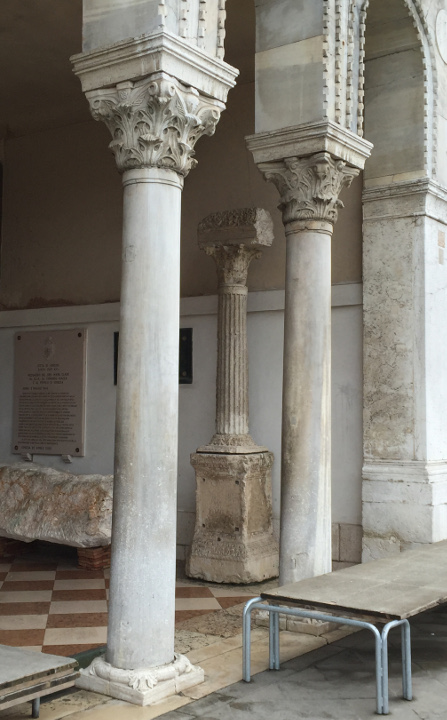 Nearby Campo (square) Santa Maria Formosa we can find the Ponte dei Preti (Bridge of the Priests). Walking down the bridge toward the square we can spot a stone element inserted in the masonry of the near building. The block has regular dimensions and two exposed sides: one displays a floral decoration, the other bears a Roman funerary inscription. 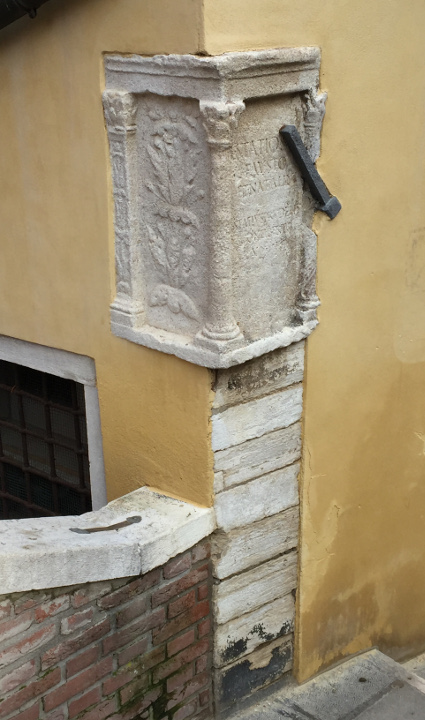 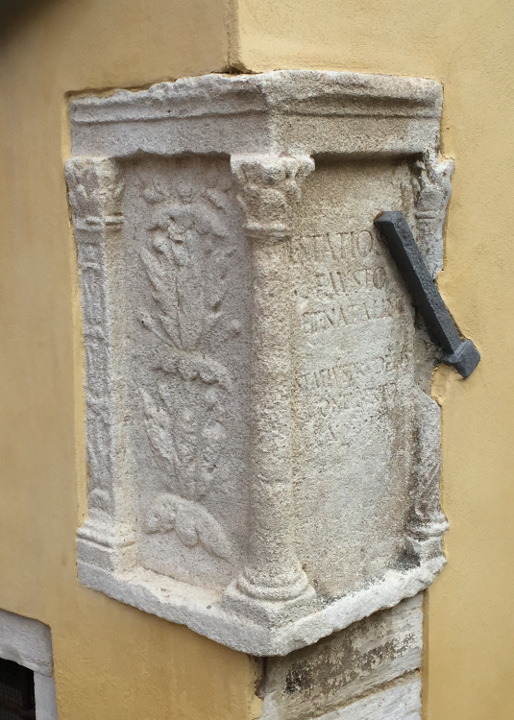 This short fondamenta (waterfront) leads to the bridge that works as a connection between the neighborhoods of San Marco and Castello. Looking eastward we can observe the facade of Ca’ Soranzo dell’Angelo facing the canal. Right to the water portal, so low to lie almost always under the tidal level, it is possible to catch a sight of a Roman funerary inscription.

Epigraphs in Latin language have always constituted a puzzle/enigma for historians and archaeologists, because they suggested a possible Roman origin for this city. Recent studies have finally excluded this hypothesis and have confirmed that those stone elements come from different sites in the mainland, some of which have been located.

In the Middle Ages these stone elements had certain economic value, since they were “imported” from the mainland; for this reason ashlars with inscriptions were mainly used to decorate buildings and to tell a story.

The story they had to tell was the one of a rich and powerful city, whose origin – even if not directly related – had to be linked to the myth of Rome and its Empire.

Thanks to the activity of archaeologists, historians and archivists we now knw that the origins of Venice were more humble: never mind! This city will come to terms with it and will continue to guard its Latin inscriptions as precious gems destined to the eyes of the most curious people.