The luxury shopping in Venice has existed for centuries. In the 19th century aristocrat foreign visitors fell in love with the city and went to the antiquarian shops to buy Venetian paintings, brocades, velvet ‘velluto soprarizzo’, furniture and Murano glass.

Some important collections of Venetian masterpieces had already been created in the 18th century: a big collection of paintings was sent to England by the consul Smith, King Fredrick IV’s had a collection of Murano glass, but many important Venetian Masterpieces were sold in the 19th century, after the fall of the Venetian Republic by famous antiquarians working in the city, like Michelangelo Guggenheim.

The American painter Ralph Curtis, whose family bought an apartment in the Palazzo Barbaro on the Grand Canal, painted portraits, genre scenes, interiors, still life and landscape, the paintings in particular represented urban scenes, where a large part of his work focuses on Venice, loved Venetian Art. The Curtis owned a Tintoretto and bought a portrait of Bernardo Strozzi, the famous Genoese artist of the 17th century, who worked and lived in Venice for a long period

Palazzo Barbaro on the Grand Canal

Isabelle Gardner, the founder of the Fenway Court Museum in Boston, bought many Old Master paintings, including ‘The Rape of Europe’ by Tiziano, but she refused to buy Titian’s ‘Amor sacro and amor profano’, (that remained in Italy and is exposed in the Galleria Borghese in Rome), offered to her by Bernard Berenson.
The ‘Rape of Europe’ was painted by Titian for Philip II of Spain and given to the Duke of Orleans and was in the Orleans’ collection for most of the 18th century. She purchased also Gothic windows of Istrian stone, pieces of furniture and cuori d’oro, the leather painted and guilted Venetian decoration panels. 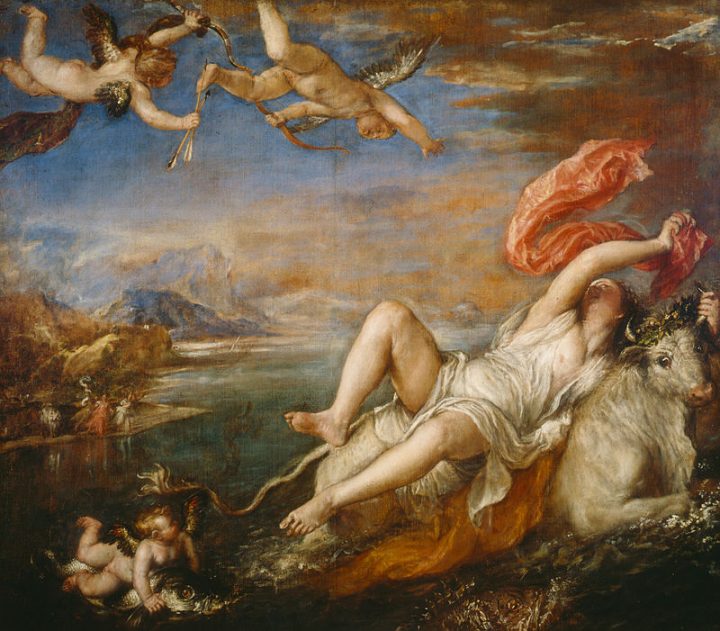 Lady Charlotte Schreiber, the English-Canadian painter and illustrator, had a passion for the artistic Venetian craftsmanship and was a compulsory shopper, she collected porcelain, but loved also Murano glass.
She became the first woman elected to the Royal Canadian Academy of Arts and was a friend of Abate Zanetti, the founder of the museum of Glass in Murano. She visited the Glass-factory Salviati to see the Glass Works and bought copies of old Venetian Glass from the Compagnia Venezia Murano (C.V.M.).

The origin of the Pauly & C.V.M. goes back to those glorious days in the second half of the 19th century when Murano glass enjoyed a period of Renaissance and the Compagnia Venezia Murano was founded in 1866 by Antonio Salviati, who was joined in the same years by important English partner, like Austen Harry Layard, (who was Ambassador in Constantinople and Minister Plenipotentiary to Madrid).
The company had two headquarters, one in Murano, the other one in Venice in Palazzo Barbarigo, where the mosaic workshop was installed, producing mosaics destined for building all over Europe and America. 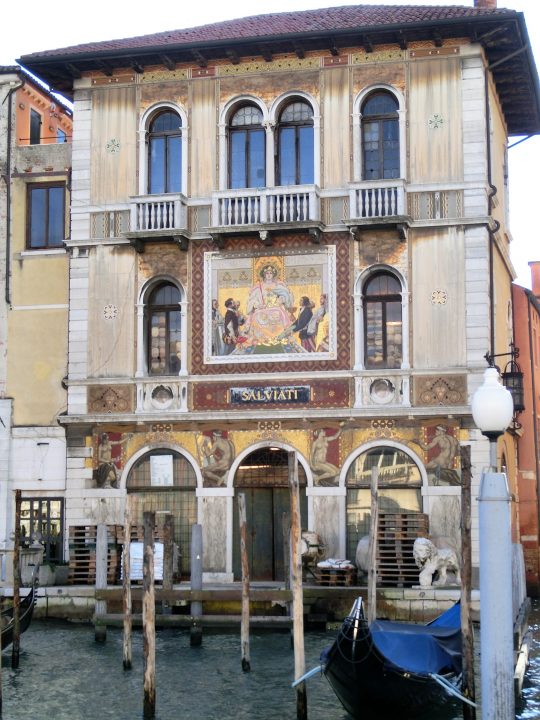 Palazzo Salviati on the Grand Canal

The painter and art critic John Ruskin, who reproduced the great Venetian masterpieces and made many accurate designs of the architectures of the city, wrote to his father in 1845 that he was looking into the shops in Venice and bought only some antique glasses, because all the jewelleries he saw ‘was vile’ and he ‘hate their beat work’.
He wrote about the Venetian glass in the Stones of Venice : “The old Venice glass was muddy, inaccurate in all its forms, and clumsily cut, if at all. And the old Venetian was justly proud of it… the old Venetian cared not a whit whether his edges were sharp or not, but he invented a new design for every glass that he made, and never moulded a handle or a lip without a new fancy in it. And therefore, though some Venetian glass is ugly and clumsy enough, when made by clumsy and uninventive workmen, other Venetian glass is so lovely in its forms that no price is too great for it; and we never see the same form in it twice. Now you cannot have the finish and the varied form too. If the workman is thinking about his edges, he cannot be thinking of his design; if of his design, he cannot think of his edges. Choose whether you will pay for the lovely form or the perfect finish…” 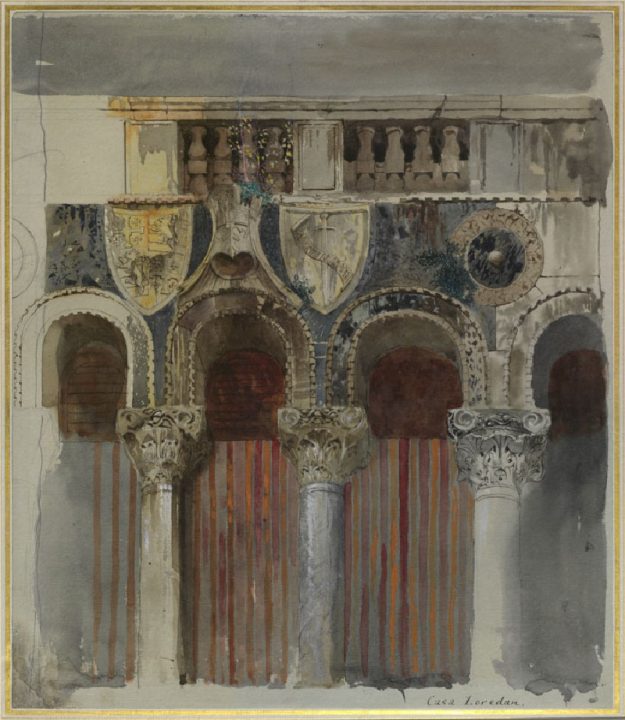 In 1880 the American painter Robert Browing, who was living in Ca’ Rezzonico Palace (where he died in the mezzanine apartment in 1880), went with his sister to visit Salviati glass factory in Murano. 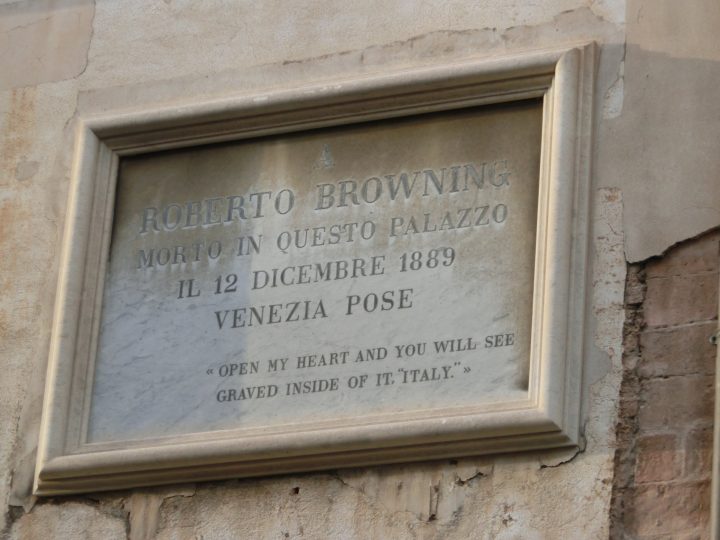 Lady Layard spent many months in Venice since the 1870, where she met John Ruskin, went to the furnace Venezia e Murano many times and was interested in restauration of the basilica of San Marco, and bought some special objects made for her. 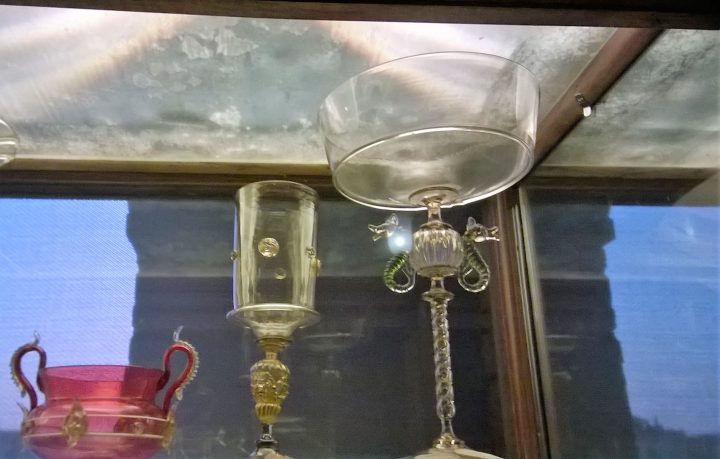 other examples of Salviati pieces

The Art of glass was living a revival together with Burano laces and attracted many buyers and collectors from all over Europe and America. The Bestveniceguides invite you to discover together the history of foreign art collectors, their palaces on the Grand Canal and the still living amazing Venetian Arts and Crafts.