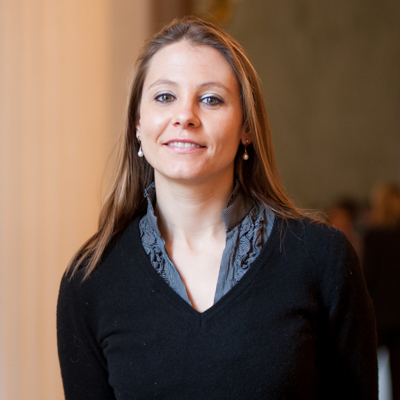 There is a marvelous palace facing the Grand Canal, between the Accademia and Ca’ Rezzonico. It is called Palazzo Rocca Contarini degli Scrigni: a lot of names, a lot of history.

This prestigious private mansion is normally closed to the public except for during certain special events like weddings, birthdays, and fashion shows. Even if you have nothing to celebrate, you can ask your Best Venice guide to visit the palace, of course at the owners’ presence and availability.

The Palazzo is an experience you will never forget.
As soon as you step inside you will reel many centuries backwards, to the time of the Republic of Venice. Like all the other palaces on the Grand Canal, Rocca Contarini has two main entrances: one from the water (“water door”) and one from the street (“land door”).
Entering through the former, i.e. from the back street, you will find a 14th century courtyard, which includes a floor pave to accommodate a central water well, as well as a flowered garden adorned with time-worn marble statues. 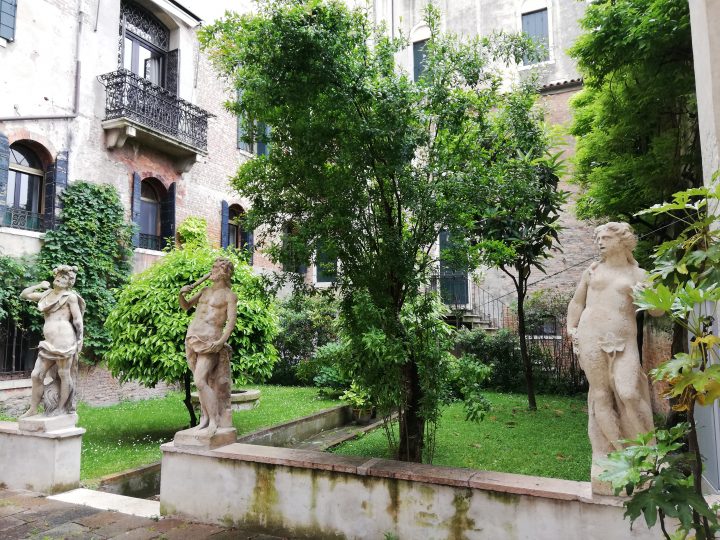 The 14th century internal façade, facing the courtyard, is embellished by frescoes, which were very popular at the time of the Most Serene Republic. Frescoes adorned entire façades and walls of private palaces, as astonished ancient writers reported in their books or letters.

Entering the main door of the palace, you find yourself in the “androne”, a vast corridor on the ground floor. On the either side of the floor gondoliers lived and rested, as they were full-time employees of the noble family.

The “androne”, central corridor on the ground floor

A steep staircase leads to the first noble floor.
Having a look at it from the last step of the stairs, you will notice that the atmosphere is well-preserved and accurate in every detail.

The “portego” (central corridor that corresponds to the polifora in the main façade) has an original furnishing dating back to the 18th  century. There is marmorino marble on the walls, and carpets that only partially cover the typical Venetian floor, the “terrazzo alla veneziana”, which are popular everywhere in the city. 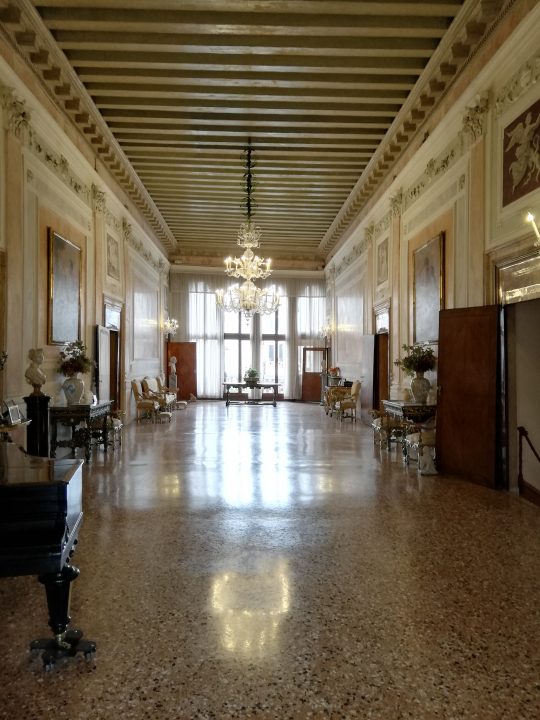 The “portego”, central corridor on the first floor 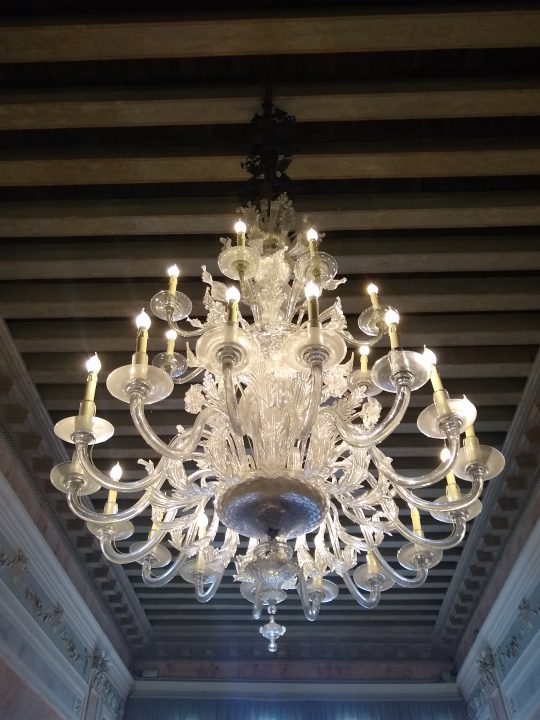 The Murano glass chandelier in the “portego”

And then, of course, family pictures are everywhere, considering that the current owners have lived here since 1890.
Distinguished characters have entered the palace to visit Rocca Contarini family, such as the Italian poet Gabriele d’Annunzio, and Guglielmo Marconi, who invented the radio.

In 1985, even Charles and Diana graced the palace with their presence. As guests in Venice, the Prince of England and his wife required a palace on the Grand Canal, in which the owners had been permanent residents for at least three generations.
So here they were welcomed and were offered a cup of tea in the “salotto rosso”, the red living room. 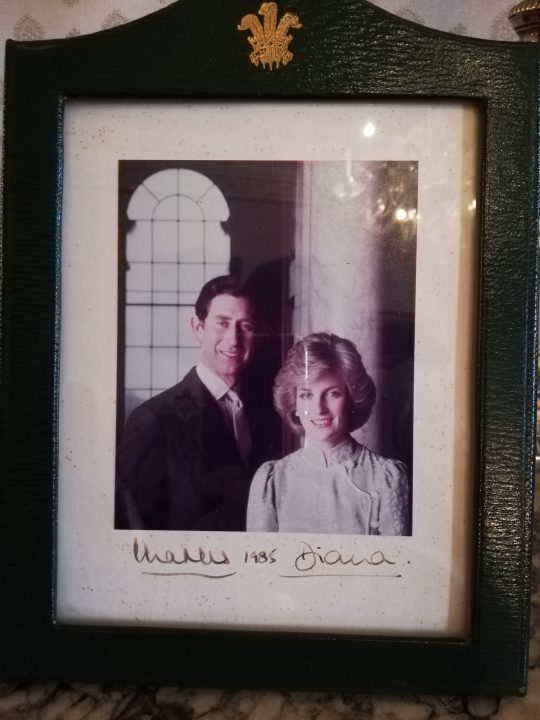 The view from the “salotto verde”, the green dining room, over the Grand Canal is awe-inspiring: you will see the gothic Frari bell tower on your left side, the baroque Ca’Rezzonico façade, the Grassi Palace just in front of you and then, on your right side, the modern Accademia bridge and the San Vidal gondola station.

Panoramic view on the Grand Canal 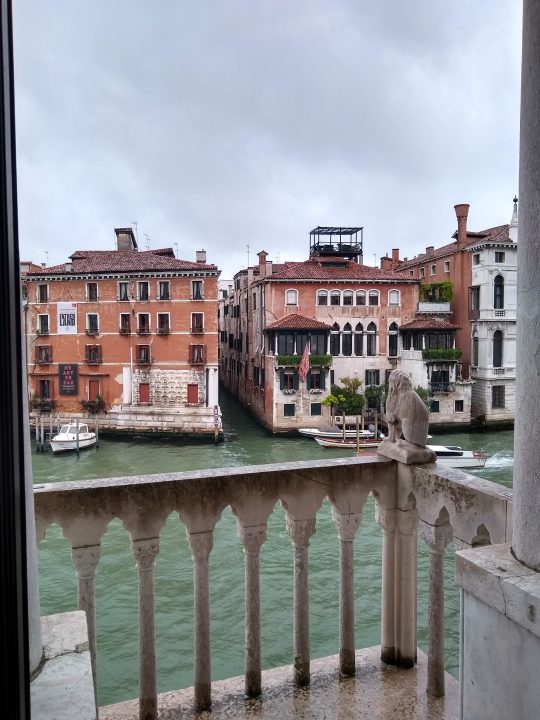 Panoramic view from the “salotto verde”

One room that you surely cannot miss is the bedroom, whose ceiling is painted with amazing frescoes by Jacopo Guarana. It represents an allegory of the Sun and the Moon running after each other in the never-ending alternation of days and nights.

The fresco in the ceiling 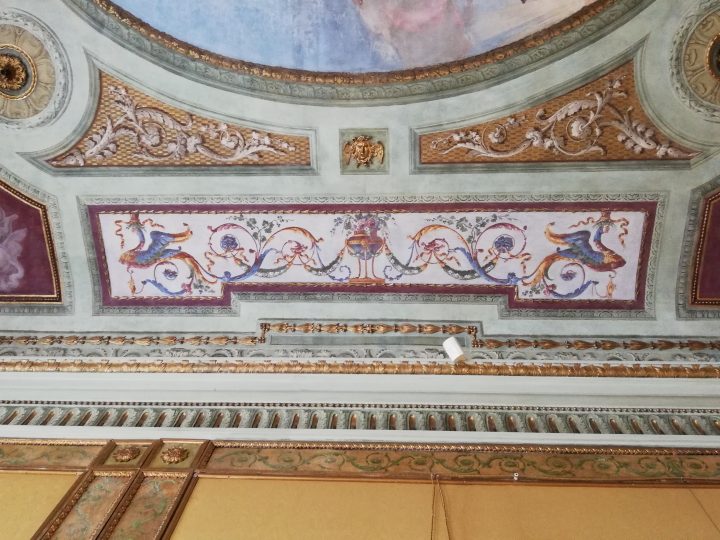 A detail of the decoration in the ceiling

Coming back to the courtyard, you can also use the “staff staircase”, a narrow spiral staircase used by family’s servants to move around the mansion, thus respecting the privacy of the owners.

The Rocca Contarini palace is really worth a visit. On request, they offer also a “spritz” and “cicchetti” tasting (typical Venetian aperitif). You can enjoy them while experiencing the extraordinary atmosphere of the palace. Ask to your Best Venice Guide to bring you there!