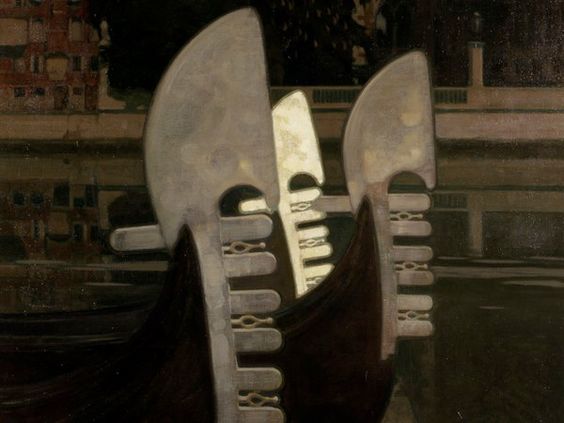 Ever since the Renaissance, Venice has often been a favorite subject for painters. Yet, there are many different ways to portray a city: a painter can try to capture its cityscape, its people, or the emotions that it arouses in the visitor.

Exploring the collection of the Museum of Modern Art in Ca’ Pesaro, I’ve picked out some portraits of Venice by different artists from different periods: which one is “your” Venice?

Intimate and without the crowds: Ippolito Caffi

Most of us might not consider exploring the canals on a cold and foggy day a pleasant experience, but the winter weather can gift us with some unexpected moments of beauty that we would rarely find in other periods of the year. Long after this painting was completed, Nobel prize winner Joseph Brodsky also praised winter in the city, visiting Venice in the cold season for 17 years and writing about it in Watermark.

A romantic dream of the past: Giacomo Favretto 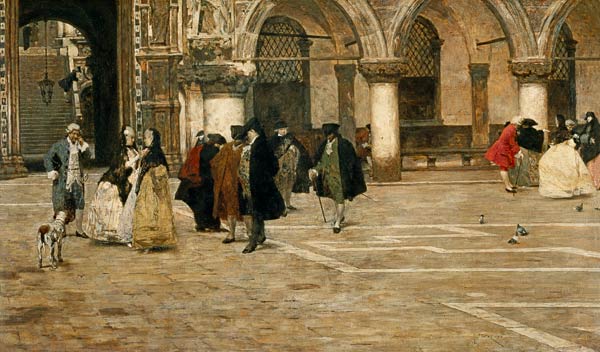 The Stroll in the Piazzetta, 1884, Favretto

For many visitors, a journey to Venice is a step back in time. Even more so for the artists who have used the city as a set for their fantasies of the past. Favretto goes back to the last century of the Venetian Republic, the Settecento, imagining the frivolous gatherings of noblemen and noblewomen in their fancy attire through the eyes of a 19th century man who is aware that they are nothing but a postcard from a bygone era.

A triumph of gold, Pietro Fragiacomo

Like Turner before him, Fragiacomo focuses on the unique light in Venice to transform a view of the piazza into a vision. The sunset after the rain creates golden reflections and the artist is able to make us feel the mist surrounding everything: the people, the streetlights, and the solemn façade of St. Mark’s Basilica.

Even in the smallest details, Venice is unmistakable: some sights can be found only here and nowhere else in the world. Marussig chooses to represent the city through the unique design of some ferri da prua, the metal decorations on the bows of the gondolas. The city can be glimpsed in the background, and in the reflections in the canal water the gondolas float on.

Dancing on the water: Fortunato Depero

Despite being a member of the Futurist movement, a group of artists that praised modern cities, Depero seems fascinated by the “past-loving” city on the lagoon in a series of works dedicated to Venice. Like Marussig, Depero too chooses the gondola, together with its mooring poles and the distinctive lamppost that can be found at the docking stations. Interestingly, all these elements are not depicted as part of a cityscape, but seem instead to be dancing: as the title says, they create a rhythm, like the water of the canals that is always on the move.

“I believe it will be difficult for me to make more paintings like these, because I have left Venice.”
(Tancredi, 1959)

How can abstract art depict a city?
The many paintings that Tancredi created during his stay in Venice often show abstract landscapes made of squares and dots. They may look like a view of the city from above, or they may remind us of the Venetian art of the past: small touches of layered color like mosaic tiles. Regardless of what they may bring to the viewer’s mind, they express above all the feelings and emotions that the city aroused in the artist, the atmosphere surrounding him because, as Tancredi explained: “the work is always bound to the place in which it is produced”.

*Peggy Guggenehim, who supported Tancredi and let him use a studio in her house at Palazzo Venier dei Leoni, used these adjectives to describe the paintings created by the artist during his Venetian stay.