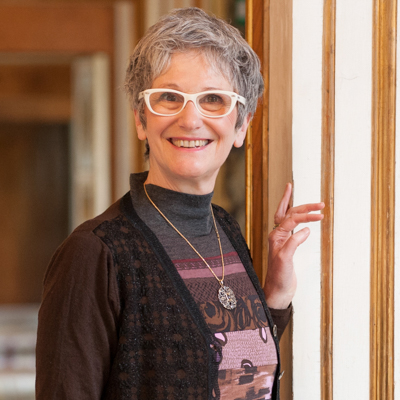 I am not a native Venetian. I was born in Como and grew up in Milan; Venice was a choice, and this choice eventually happened to fill my entire life, and to become my job as well. I enjoy the privilege of sharing with others the experience of what I intimately know – and love.

A city is never a monolithic block, and so it is for Venice as well. There are many different Venice, many different levels and paths to follow, at the research of our own Venice, of what in this unique city can arouse our curiosity, our interest, our emotions. Venice was and is a port, and therefore a bridge connecting and absorbing different people and ideas. Like a surfer, I like to glide among past and present, art and economy, anecdotes and history, and I like to tell about Venice through the stories of the many women and men who gave their city its shape, beauty and life. If Venice is a city, which is to discover by walking, it is exactly by walking that I like to question it, to listen to it and – in my job – to give it voice.

From 1990 to 1995 I contributed to the Educational Projects of the Musei Civici Veneziani.

In the same years I worked for the Soprintendenza ai Beni Storico-artistici di Venezia, for the General Catalogue of works of art in the Venetian churches.

I contributed in writing texts for some Guides of Venice, such as “Le Chiese di Venezia”, Electa 1993, and “Venezia, Guide per Viaggiare”, Touring Club.

In 1994 I began to contribute to the educational activities of some Cultural Associations in Veneto, with lectures about History and History of Art and guided tours in Venice and in all the important temporary exhibitions in the Venetian Museums.

In 2007 I translated into Italian the book by R. W. Scribner, ‘For the sake of simple folk. Popular propaganda for the German Reformation’, Clarendon Press, Oxford.

Since 2000 I am a licensed guide in Venice, in English, German and French

After the fall of the Republic: itineraries out of the beaten paths at the discovery of the less known season in the history and architecture of Venice: the 19th and 20th century.